The interdisciplinary research centre ACSEM brings together research into history, art and culture from the 17th century. One of the initiatives of the new centre is a series of lectures in which researchers analyse history on the basis of an object. Judith Noorman: ‘We have simply outgrown the term ‘Golden Age’.’

‘It is not the case that people say: it’s wrong, you’re not allowed to use it anymore, it’s over’, says Noorman. ‘Such a development occurs very gradually, both in society and academia.’ 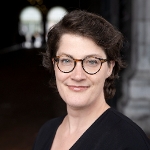 Copyright: Bob Bronshoff
Are there any people at all with an impeccable reputation in the 17th century? By present-day standards, there aren’t actually. Judith Noorman

‘The term is problematic, also because it now evokes a different association among people. The term is increasingly associated with an ode to the 17th century and glossing over inequality’, she explains. ‘It is also not in keeping with the research that we conduct, because we don’t only research the golden side of that time. At the UvA, research is also conducted, for example, into immigration, slavery and gender in the 17th century. ‘The Golden Age’ only tells part of the story; our interdisciplinary research covers a much broader area. We have simply outgrown the term ‘Golden Age’.’

The new name is straightforward: Amsterdam Centre for Studies in Early Modernity. ‘We had our doubts about that for some time’, says Noorman. ‘We first thought about naming the centre after someone. However, should that be a man or a woman? And are there any people at all with an impeccable reputation in the 17th century? By present-day standards, there aren’t actually.’

‘You soon find yourself in a kind of cul-de-sac this way. We have now chosen to use a neutral term, which also gives us greater freedom to make excursions into the 16th and 18th centuries and other regions.’

Information can be found on the centre’s website about the specialists who are affiliated with the centre and what they do. Along with the change of name, a new series of lectures has also been set up. In the Object Colloquium series, researchers analyse individual objects in order to reexamine and discuss early modern history.

‘Each lecture has an object or product as starting point, such as cheese, blue paper or shells. We do that in order to jointly explore early modern history once again with a new outlook.’

The UvA website uses cookies and similar technologies to ensure the basic functionality of the site and for statistical and optimisation purposes. It also uses cookies to display content such as YouTube videos and for marketing purposes. This last category consists of tracking cookies: these make it possible for your online behaviour to be tracked. You consent to this by clicking on Accept. Also read our Privacy statement

Cookies that make it possible to track visitors and show them personalised adverts. These are used by third-party advertisers to gather data about online behaviour. To watch Youtube videos you need to enable this category.